As a young child, I recall quite frequently being “babysat” by my Granny, although I thought of them more as “playdates” of sorts. For some reason, one of the memories that stands out to me most during these visits, was a simple moment of TV viewing. I don’t exactly know why this particular moment comes to mind, as there are many others which I feel ought to have priority, but this one memory keeps persisting, so I’ve come to the conclusion it’s time I write it out.

Being the youngest granddaughter in the family, I wasn’t around for a lot of what my significantly older cousins may have experienced when they were young. So, in an attempt to entertain my young energetic mind, while doubling as a way to share my family’s recent history, she decided to show me some old family videos. With Granny sitting in the old remote-controlled beige recliner chair, and me sitting across the room on the old green couch, we began to watch a compilation of various different tapes. I recall one of the VHS tapes we watched being an anniversary of Granny and Grandad, and I was fascinated to watch my then much younger family doing group singing numbers, in addition to many other such strange things. As it got to a clip of my then passed grandad cutting the cake, we both chuckled at his struggles to slice the cake one-handed, due to his Parkinson’s disease. But then again, it was not his unavoidable shaking which we laughed at, as that would seem somewhat unkind. Rather, we laughed at his playful manner in doing so, because instead of being sullen or disgruntled with his worn-out, uncompliant body, he made the choice to laugh at his own fragility, and purposely exacerbated his shakes. I didn’t get the chance to really know my grandad, as he passed when I was very young. Yet it’s memories such as these, and the few I have of him as a young child, that make me wish I’d been able to know him better.

As Gran and I sat laughing at his jolly carefree demeanour, I looked over at her, so as to share this joyful moment, when I noticed tears silently lining her face, though strangely, she was still smiling. Being young as I was, I realize now that I really didn’t understand the appropriate things to say in these kinds of circumstances. Therefore, my attempts to comfort her consisted of my stating that “I understood what it felt like, as my fish had recently died,” followed by a run-through of the exact emotions I had felt at my fish’s death. Nevertheless, I thankfully followed the one overpowering instinct I had, which was to rush over, climb on her lap, and bestow upon her the biggest cuddle/embrace humanly possible. I can’t recall what she said to me, especially in response to my naïve condolences, but I remember the feeling of that moment fondly. It wasn’t one of her mourning as you might think, but instead one of longing and thankfulness. Longing to see her beloved husband again, as she knew she would, and thankfulness for the memories they’d been able to experience together. Selfishly, I am immensely grateful she lived through to my young adult years, as she was one of the greatest blessings in my life and of those all around her. Yet, it gives me great peace to know that she’s with her husband again. Devoid of any more longing, just my two grandparents standing side by side as they should be, alongside our loving saviour.

I love and miss you Gran, give Grandad a hug for me.

Until I see you again. 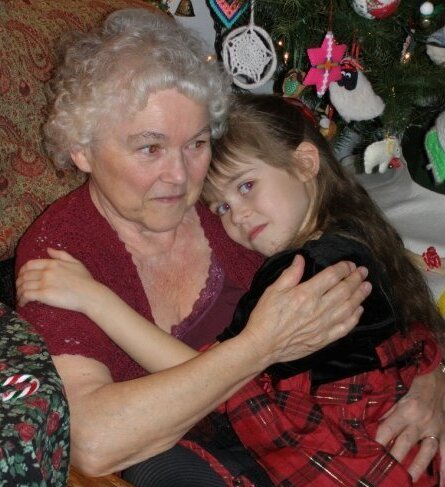